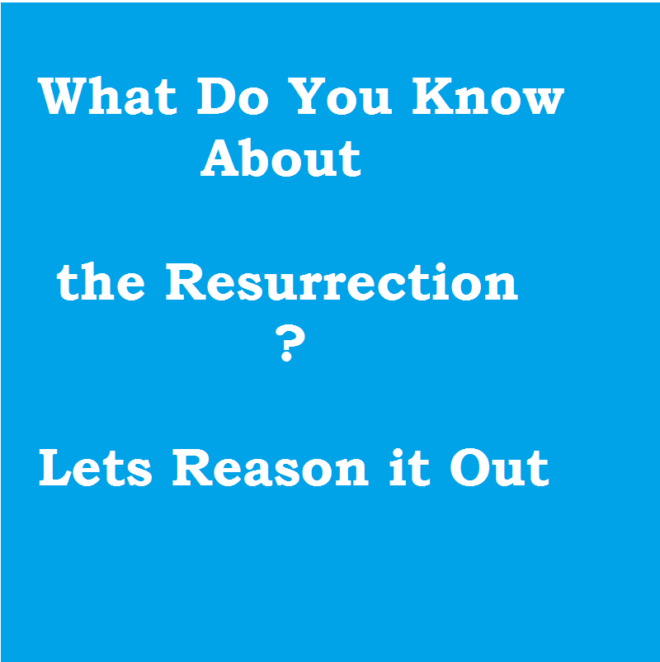 The Resurrection, Lets Reason It Out

In the beginning, when God created the Heavens and the Earth. After preparing the Earth for millions of years for the crowning point of His creation, He created Adam the first man. After creating Eve, God shared His vision for the Earth: Adam, Eve and their children subduing the Earth and extending the Garden of Eden to encompass the entire Earth. He told them they could eat from all the trees in the Garden except one, if they ate from that one tree they would die. Not die and go to Hell. Not die and go to Heaven, just that they would die.

God explained this a little further through the inspired verse found at Ecclesiastes 3:19 which states that humans and animals are the same in that when the force that keeps our heart beating stops we both die. To show that death is the opposite of life the verses at Ecclesiastes 9:5 and 10 states: For the living know that they will die, but the dead know nothing at all, nor do they have any more reward, because all memory of them is forgotten . 10 Whatever your hand finds to do, do with all your might, for there is no work nor planning nor knowledge nor wisdom in the Grave, where you are going.

After death entered into the world, God would explain to men of faith, their faith was not in vain. Men in the Bible like Noah, Abraham, Isaac, Jacob, Job and many more had faith and trust that Jehovah would remember them at some distant time. Jehovah inspired men to write about a future time that a resurrection would take place. What would have to happen first?

The Day of Jehovah is a pivotal day. What happens on that day? On the Day of Jehovah, God’s patience ends. He set a day that He would once again become active on the Earth. Many people may think He does not care what happens on the Earth. While others believe He has died or that all things have come about by some Great Accident, suddenly the opposite will become obvious as Jesus Christ and millions of angels express Gods will to destroy everyone that has lived their life in contrast to the Way of Life Jesus recommended to his followers.

After that Great Day, God will once again control the Peace on Earth. He protected a group of Bible Teachers through that turbulent period. What will those teachers now do? Just as they are teaching people all over the Earth about Jehovah’s Kingdom today, then He will mobilize them to teach those resurrected day after day about Jehovah’s Kingdom and How they can live in Harmony with the Laws of that Heavenly Government. This is what is expressed at John 5:28,29

When Lazarus was resurrected after being dead for some four days, did he ask who am I? Where am I? Who are you? No, Lazarus knew who he was, being resurrected as the same person he was before he died. He did not complain about being brought back from Heaven, for before Jesus death no man had been resurrected to spirit life in the Heavens with countless angels that have been created and live there. Everyone that has lived and died from Adam and Eve until the day Jesus was resurrected to the Heavens are still dead waiting for what they hoped for: a resurrection from the dead to a peaceful new earth where they can grow their crops and build their homes while enjoying eternal peace and security.

While Jesus was on Earth, He taught those close to him that they would come to Heaven after their death to rule with him as Kings and Priests of God’s Kingdom. That was a limited invitation, only 144,000 invitations were given to some of those who dedicated their lives to do God’s will faithfully until their death. Just like our governments today, there are many more subjects of the government than there are rulers. What does this mean for the most of us today? Our Hope is either to survive the Great Day of Jehovah and have the opportunity to live forever or if we die today than our Hope is to be resurrected with men like Noah, Moses, John the Baptist and many others who will learn what they missed while asleep in death and join the ranks of all those men and women who are learning day by day how to continue living in God’s Service.

After this I saw four angels standing on the four corners of the earth, holding tight the four winds of the earth, so that no wind could blow on the earth or on the sea or on any tree. 2  And I saw another angel ascending from the sunrise, having a seal of the living God; and he called with a loud voice to the four angels to whom it was granted to harm the earth and the sea, 3  saying: “Do not harm the earth or the sea or the trees, until after we have sealed  the slaves of our God in their foreheads.”

9  After this I saw, and look! a great crowd, which no man was able to number, out of all nations and tribes and peoples and tongues, standing before the throne and before the Lamb, dressed in white robes; and there were palm branches in their hands. 10  And they keep shouting with a loud voice, saying: “Salvation we owe to our God, who is seated on the throne, and to the Lamb.”

11  All the angels were standing around the throne and the elders and the four living creatures, and they fell facedown before the throne and worshipped God, 12  saying: “Amen! Let the praise and the glory and the wisdom and the thanksgiving and the honor and the power and the strength be to our God forever and ever. Amen.”

13  In response one of the elders said to me: “These who are dressed in the white robes, who are they and where did they come from?” 14  So right away I said to him: “My lord, you are the one who knows.” And he said to me: “These are the ones who come out of the great tribulation, and they have washed their robes and made them white in the blood of the Lamb. 15  That is why they are before the throne of God, and they are rendering him sacred service day and night in his temple; and the One seated on the throne will spread his tent over them. 16  They will hunger no more nor thirst anymore, neither will the sun beat down on them nor any scorching heat, 17  because the Lamb, who is in the midst of the throne, will shepherd them  and will guide them to springs of waters of life. And God will wipe out every tear from their eyes.”

Note that the Tribes are not literal, only the total number of 144,000. Jehovah instructs the angels prepared to bring destruction to the ungodly on Earth to wait until the last faithful King is Sealed. Verse 9 , 10, 13-17 speaks of those who survive the Great Day of Jehovah, their subjection to God’s Kingdom and How He Will Lead Them To Eternal Life. What kind of Life will that be? God Promises He Will Wipe Out Every Tear From Their Eyes not Just Once, But Many Times Jehovah Promises the Real Life for Those Who Serve Him On Earth.

Revelation 21:1-8 And I saw a new heaven and a new earth;(God’s Kingdom over a cleansed people)  for the former heaven and the former earth had passed away,(Satanic Influenced Rulers and Wicked People) and the sea is no more. 2 I also saw the holy city, New Jerusalem,(God’s Kingdom) coming down out of heaven from God and prepared as a bride adorned for her husband. 3 With that I heard a loud voice from the throne say: “Look! The tent of God is with mankind, and he will reside with them, and they will be his people. And God himself will be with them. 4 And he will wipe out every tear from their eyes, and death will be no more, neither will mourning nor outcry nor pain be anymore. The former things have passed away.”

5 And the One seated on the throne said: “Look! I am making all things new.” Also he says: “Write, for these words are faithful and true.” 6 And he said to me: “They have come to pass! I am the Alʹpha and the O·meʹga, the beginning and the end. To anyone thirsting I will give from the spring of the water of life free. 7 Anyone conquering will inherit these things, and I will be his God and he will be my son. 8 But as for the cowards and those without faith and those who are disgusting in their filth and murderers and the sexually immoral and those practicing spiritism and idolaters and all the liars, their portion will be in the lake that burns with fire and sulfur. This means the second death. (No Hope of Resurrection)

The Resurrection is an Easy Thing to Reason Out

2.Jehovah God and Jesus created Adam and Eve. They were commissioned to “fill the Earth and subdue it”. They were never invited to Heaven. Jehovah told them disobedience would bring death, they died.

3.Jesus came to Earth to buy every person with his perfect life and blood. To help Jesus rule God’s Kingdom Government, God would resurrect those who dedicated their life to His high moral values while teaching others about Him and His Kingdom to Heaven . Matthew 24:14, 28:19,20. These 144,000 co-rulers, men and women, who, like Jesus, know what it is like to be human would be changed into spirit beings at their resurrection. They would then shepherd those human beings on Earth, teaching them how to improve their lives while learning what God expects of them. Isaiah 48:17,18

17 This is what Jehovah says, your Repurchaser, the Holy One of Israel:

The One teaching you to benefit yourself,

The One guiding you in the way you should walk.

18 If only you would pay attention to my commandments!

Then your peace would become just like a river

And your righteousness like the waves of the sea…….”

4.As we consider the time markers found in the Bible, we realize that the number of 144,000 people who would be invited to Heaven as Jesus associate and friend is down to the last few replacements OR has been filled. This leaves only one resurrection hope left, the resurrection from the dead to live as a human on Earth. This is the natural resurrection, once it is over, the term will not be used again. The Bible explains how you will spend your days, No not strumming harps in the clouds. Isaiah 65:21-25

21 And they will plant vineyards and eat their fruitage.

22 They will not build for someone else to inhabit,

Nor will they plant for others to eat.

And the work of their hands my chosen ones will enjoy to the full.

23 They will not toil for nothing,

Nor will they bear children for distress,

Because they are the offspring  made up of those blessed by Jehovah,

And their descendants with them.

24 Even before they call out, I will answer;

While they are yet speaking, I will hear.

25 The wolf and the lamb will feed together,

The lion will eat straw just like the bull,

And the serpent’s food will be dust.

They will do no harm nor cause any ruin in all my holy mountain,” says Jehovah

Want to Learn More From the Bible

Consider: What are the Times of Restoration?

or : What Doest the Bible Say About Life After Death