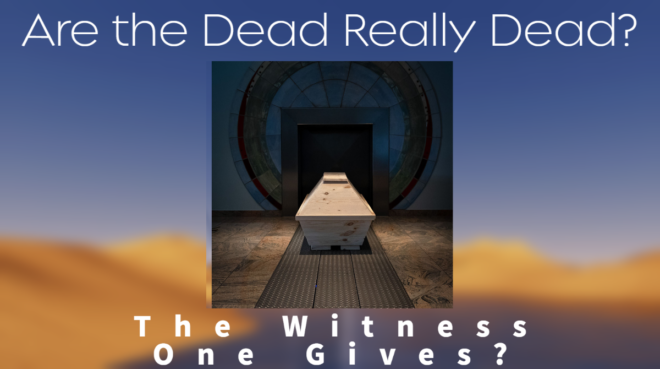 What is the condition of the dead? Do they THINK? Do the Dead live on as a spirit or soul? Are the Dead REALLY DEAD?

The Dead have no thoughts, how do we know? As the foremost authority, God inspired the wisest imperfect man, King Solomon, to right this truth in the Bible: Eccl.9:5 For the living know that they will die, “but the dead know nothing at all”, nor do they have any more reward, because all memory of them is forgotten. God states “but the dead know nothing at all,” We should not call God a liar by arguing with Him about it or denying what He clearly states the condition of the dead, that they do not think.

Every matter should be established by 2 witnesses or inspired Bible writers through whom God speaks: Through King Solomon Eccl.9:10 “Whatever your hand finds to do, do with all your might, for there is no work nor planning nor knowledge nor wisdom in the Grave, where you are going”. God states through Moses at Genesis 3:19 “In the sweat of your face you will eat bread until you return to the ground, for out of it you were taken. For dust you are and to dust you will return.” Does The DUST think? Does the DUST fly about as a spirit being, thinking as the brain did? No, blood circulating through the brain and the force or spirit of God given to every infant conceived, makes thought possible. When we die the force that kept the heart beating returns to God. That force or spirit is thoughtless, a force like the sun, if it dies no light is produced.

God states at Psalm 115:17 “The dead do not praise Jah; Nor do any who go down into the silence of death.”

God states at Psalm 146:4 “His spirit goes out, he returns to the ground; “On that very day his thoughts perish.” These verses are the basic beliefs God taught the Hebrews, they have not changed!

Jesus was born without defect in thought or flesh by a conception caused by God. He proved the point that the dead do not think by the resurrection of Lazarus who had been dead four days. If Lazarus was alive as a spirit in Heavenly bliss those four days, it would be cruel to bring him back to a painful life as a human, only to suffer even more until an eventual death. Jesus would not be so unloving to his friend. No, Jesus stated that Lazarus was dead, as a person in deep sleep, Jesus woke Lazarus to human life. There is no account of Lazarus thoughts while dead! Which I’m sure the Sanhedrin members questioned him about constantly for days.

Jesus was dead for parts of 3 days, powerless in death, until God raised him as a spirit, clothing him with what appeared to be a fleshly body similar to the one hung on the stake. He was raised a spirit, in a spirit body, but clothed with an imitation of a mans body until he taken up to Heaven. Take note that after his resurrection, Mary and others did not recognize him. Also, he was able to travel at a greater speed and arrive ahead of those on the road to Galilee. Too, we ask did the body fall to the ground after he was raised to Heaven before their eyes? Was it buried? Again, if Jesus had a living soul, a spirit encapsulating all his thoughts & memories that left at death, why was it inactive in death parts of three day? Why did he need a resurrection?

What is expected of man today? To acquire truthful knowledge given to man in the Bible. To distance ourselves from the houses of falsehoods and those seeking their own solution. Jesus taught that the solution to this temporary system of governments under Satan’s influence was God’s Kingdom. At God’s appointed time it will suddenly appear. Like Jesus, we must continue to pray for it, hope in what it will provide, like him let us pray “Let your Kingdom Come, Let Your Will be done on Earth as it is in Heaven.” Mtt.6:9,10

Since the dead are lifeless, what hope do they have? What Hope is there for us? What does the Bible say?

Seek out other witnesses of these facts at jw.org