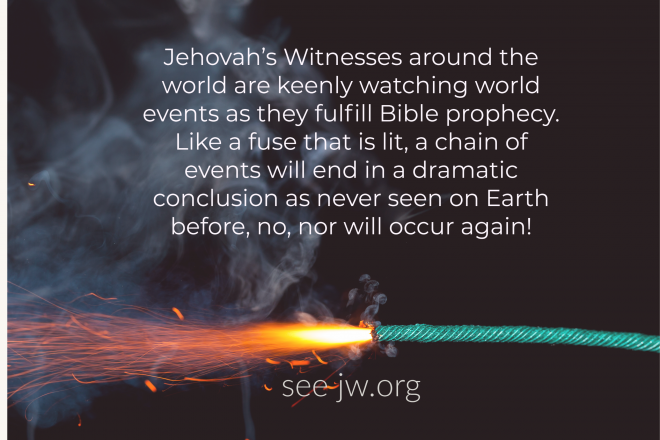 What is Bible Prophecy? What Can We Expect to Happen?

The Bible is a series of prophecies (accurate forecasts) of events given to the offspring of Adam and Eve that they might understand their beginning, their circumstances today and know accurately how to regain the sinless everlasting life their parents could have enjoyed forever. The fulfillment of Bible prophecy gives ample evidence that God has the ability to look into the far-reaching future and tell us what will occur. The prophecies in the Bible prove that He is Never wrong or inaccurate, every detail of what God foretells will come to be history! See Isaiah 55:10,11. More about prophecy

The Bible foretells how God would legally restore many of Adam’s remorseful offspring to a favorable relationship with Himself beginning with the prophecy at Genesis 3:15 where God foretells that a “seed” from His great family of obedient angels would be struck by Satan (the angelic originator of the rebellion against God’s right to rule). God’s seed would in turn give Satan a lethal blow to the head resulting in eternal death. Little by little God foretold aspects of that “seed” including where and when it would be born and how and when it would die in a sinless condition that could be applied to an infinite number of sinful humans.
After forgiveness has been made available, God foretells how humans can attain forgiveness and the same sinless condition that Adam, Eve and Jesus once had. God foretells that He would pour out Holy Spirit upon all sorts of flesh in a time period called the “Last Days”. See Joel 2:28 As a result everyone calling on the name of God, “Jehovah” will be “saved” though a “Great Day”, an End of the present rulership on Earth See Joel 2:32. Echoed at Acts 2:21, Romans 10:13.In harmony with this God spoke through Jesus and foretold other events that would mark the “Last Days of human rulership” at Matthew 24:3-21, Mark 13:5-20, Luke 21:5-36. The Last Days were foretold to begin 2520 years from the time God forsook the “Human Kingship in Jerusalem” in 607 B.C.E. Those years expired in 1914 C.E. preceding the first World War.
For the last 107 years all the items foretold have been occurring, including 2 World Wars, never before had humans involved the whole planet in the effects of war, there have been great earthquakes, diseases and food shortages in one place after another and today an ever increasing violence against one another. One facet of the “Last Days” is foretold at Mtt.24:14 and Mark 13:10. “This Good News of God’s Kingdom will be preached in all the inhabited Earth and “Then” the “End” will come.

The foretold “End” is the complete termination of this composite time period marked by a growing rebellion against God and His principles governing life. It includes the termination of false religious, commercial and governmental organizations of this time period. It also includes the lives of everyone in opposition to the truthful teachings of God through His word recorded for our instruction. There was a beginning to this painful period in mankind’s history described as “Paradise Lost” when Satan lured Eve, then Adam into disobedience of God. After the End of this system there will be another beginning described as “Paradise Regained” as some will survive the end of this system as seen at Daniel 12:1 and Revelation 7:14 and those survivors may become the humans that may never experience death at all.

Jehovah’s Witnesses have been progressively preaching the Good News while Announcing God’s Government since the late 1800’s. Jesus foretold the circuit would not be completed before he arrives in kingly power, has the preaching work been fulfilled and is the “End” imminent? The next days, weeks or months will tell if the time foreseen has been fulfilled. If yes, what are outstanding events to watch for?

The Apostle Paul was inspired to add a facet of the events preceding Jehovah’s Great Day of change to watch for at 1 Thessalonians 5:1-3 “Now as for the times and the seasons, brothers, you need nothing to be written to you.2 For you yourselves know very well that Jehovah’s day is coming exactly as a thief in the night.3 Whenever it is that they are saying, “Peace and security!” then sudden destruction is to be instantly on them, just like birth pains on a pregnant woman, and they will by no means escape”

A Powerful King will soon go forth in a Great Rage!

Daniel 11:44 “But reports out of the east and out of the north will disturb him, and he will go out in a great rage to annihilate and to devote many to destruction.45 And he will plant his royal tents between the grand sea and the holy mountain of Decoration; and he will come all the way to his end, and there will be no helper for him.” We see this will occur just before Michael / Jesus stands up as foretold at Daniel 12:1

“The Destruction of Babylon the Great“

As we see networks of common rulership’s grow, we can read the next visible prophecy that God speaks through Jesus to give us confidence what will occur. Revelation 17:9-18 foretells these networks of rulers as “kings” and a greater coalition of “kings” as the “wild beast”. The woman who has prostituted herself and sits atop them is the world of false religion which originated in ancient Babylon and has grown to inhabit every town, city and state. These kings will hate Her and the spiritistic power she wields over those she has blinded. In an instant the “kings of the Earth” will turn on Her and every religion infected with Her God dishonoring beliefs and practices. Of these Christendom is the most reprehensible due to their claiming to be Christ’s Followers.

God is Alive! Many who have denied God’s existence will be forced to acknowledge Him as Great Heavenly and Earthly anomalies occur. Too, Great Torment will descend upon every person not “calling upon the name of God, Jehovah” as He exalts Himself. Revelation 16: 21 Then great hailstones, each about the weight of a talent, fell from heaven on the people, and the people blasphemed God because of the plague of hail, for the plague was unusually great.

The kings are now irresistibly lured into a stand against God

Armageddon: a global situation where God lures all of the worlds leaders and supporters to pursue those known as Jehovah’s Witnesses. Ezekiel 38:15-17 You (Satan) will come from your place, from the remotest parts of the north, you and many peoples with you, all of them riding on horses, a great assembly, a vast army.16 Like clouds covering the land, you will come against my people Israel. In the final part of the days. I will bring you against my land so that the nations may know me when I sanctify myself through you before their eyes, O Gog.”’17 “This is what the Sovereign Lord Jehovah says: ‘Are you not the same one I spoke about in the former days through my servants the prophets of Israel, who prophesied for many years that you would be brought against them?’

Going back to the first prophecy in Genesis 3:15, this is the first liar, the first opposer of the universal sovereignty of God Almighty. God has allotted him some six thousand years to show that he can give angels and humans a better life than what God had created for them. Today humans can see that man cannot guide his own steps, yet alone rule others! Man needs God to remove the rulers of this world order and place a king like God Himself over us. This is what He has done, He has set Jesus and 144,000 co-rulers as Kings of God’s Kingdom. As foretold in verse 1 and 10, the root of Jesse, Jesus, was born through the family line of Jesse will stand up and will be installed as Earth’s New King. Isaiah 11:1-10

“The Great and Fear Inspiring Day of Jehovah” has arrived!

Ezekiel 38:16-23 “‘On that day, the day when Gog invades the land of Israel,’ declares the Sovereign Lord Jehovah, ‘my great rage will flare up. 19 In my zeal, in the fire of my fury, I will speak; and in that day there will be a great earthquake in the land of Israel. 20 Because of me the fish of the sea, the birds of the sky, the wild beasts of the field, all the reptiles that creep on the ground, and all humans on the surface of the earth will tremble, and the mountains will be thrown down, and the cliffs will fall, and every wall will collapse to the ground.’

21 “‘I will call for a sword against him on all my mountains,’ declares the Sovereign Lord Jehovah. ‘Every man’s sword will be against his own brother. 22 I will bring my judgment against him a with pestilence and bloodshed; and I will rain down a torrential downpour and hailstones and fire and sulfur on him and on his troops and on the many peoples with him. 23 And I will certainly magnify myself and sanctify myself and make myself known before the eyes of many nations; and they will have to know that I am Jehovah.’

What are Jehovah’s Witnesses Hoping for?

To be one of the many chosen to survive the Great Day of God Almighty which will bring an End to this World ruled by imperfect men and women, infused with Satanic beliefs and motives, demonic acts of violence, broken homes and lives and oppressions of many types. We hope to escape this system of life due to our relationship with God as one of His Witnesses. That hope is assured by God’s faithfulness to the promises/prophecies He has foretold! We hope to praise and worship God in His acceptable way for all eternity as the sheep of His pasturage on a paradisiac Earth. We hope to neither hunger nor thirst anymore, to never get sick again and have every pain removed, even the many pains of heart that no one but God knows we suffer from. We hope to build homes and plant gardens on our own property forever, to regain their youthful vigor and to enjoy every beautiful sight on Earth as we groom and explore every part of it.

We look forward to meeting and teaching those who will be resurrected, especially many who have had their accounts related to us in the Bible. We hope to attain a better relationship with God, one stemming from a sinless condition due to our imitating Jesus and his Great Love for His Heavenly Father! All Hope is based on evidence produced by fulfilled prophecy. Look around at the wonders of creation, the perfect balance in the atmosphere, the water cycle, the gravity while the planet soars through space at some 66,000 miles per hour in an orderly and precise way, the angle of the planet’s axis and the seasons produced by them and on and on, by this we gain faith in the Almighty God Jehovah and Trust He is able to do all that He has promised!

What are Jehovah’s Witnesses Watching for? In Expectation of All This We pray “Let Your Kingdom Come!”