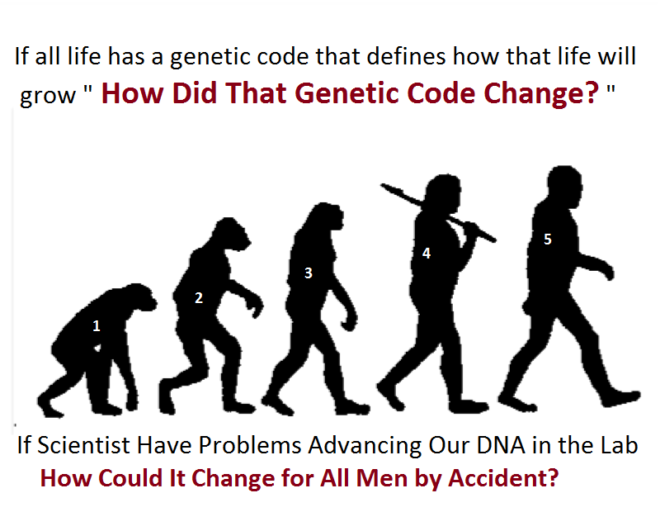 Evolution The  definition states: “the process by which different kinds of living organisms are thought to have developed and diversified from earlier forms during the history of the earth.”

or Darwinism states the “theory of the evolution of species by natural selection advanced by Charles Darwin.”

If All Life has a Genetic Code that defines every part growth, How Did That Genetic Code Change so that Men could come from Apes?  If the Male passes the majority of design through his sperm, a male would have to be advanced before intercourse to pass on HIS Advanced characteristics to the next generation. So The Picture Evolutionist use to show an example of evolution will not work, for #2 would have to have intercourse with #1 to advance #1. That Example Would Bring Us Back To Which Came First the Chicken or the Egg?

Even if chimp #1 learned to stand and walk, his brain would never advance to the equivalency of a human brain and it’s ability to reason out equations or build on previous knowledge in the chimps lifetime. Thus a chimp will never advance unless it’s DNA is altered or engineered.

In Order to Advance the Human Race, Millions of Women on Earth Would Have to be Impregnated with an Advanced Sperm. For if you only had one advanced man, he would only advance his children. How Long Would That Take To Engulf The Whole Human Race?

Six Days or Billions of Years?

Religions that have caved in to belief of Evolution because they could not explain the Six Creative Days have turned the wrong direction. In defining the Creative Days of the Bible, its most reasonable to believe that those Days encompass everything that was accomplished on that Day. The first creative day may have been billions of years in length, the second could have been millions. The term Day is best understood not as a definite length of time, but a period when something was accomplished. When we think of the Day on the Dinosaurs, it’s not so much a year or day,rather the whole time the dinosaurs were on Earth.So the six Creative Days could have been many billions of years in length.

What Was Created A Man Or Ape?

The Bible States at Genesis 1:27 “And God went on to create the man in his image, in God’s image he created him; male and female he created them.” Do Religions that incorporate evolution into their belief think God created an ape in His Image as seen in the picture? Did God Blow into the nostrils of the Ape as brought out at Genesis 2:7  “And Jehovah God went on to form the man out of dust from the ground and to blow into his nostrils the breath of life, and the man became a living person”. Did the ape(a different kind) then evolve into the man? Or Should We Just Believe The Bible Where It States That God Created Man( a HUMAN KIND) In His Image.

A Missing Link Will Never Be Found Because: In the Beginning, God Created Man in His Image