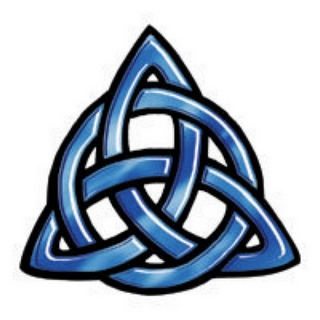 This symbol represents the Trinity. Is God a Trinity?

Do You Know This Symbol it represents Three individual spirit beings intertwined into one god. The Trinity Doctrine refers to the Holy Spirit as the third part of the Godhead which includes Almighty God as God, Jesus as God and the Holy Spirit as God, however there is not three Gods but one. This teaching goes way back in history and Christians were not the first to worship a Trinity. Today the Trinity Doctrine is embedded in the base of many churches yet their parishioners may not even know it or understand that by supporting the church you are a Trinitarian. As we read Genesis 1:2 Now the earth proved to be formless and waste and there was darkness upon the surface of [the] watery deep; and God’s active force (Holy Spirit) was moving to and fro over the surface of the waters. Jehovah’s name means “He Causes to Become”, He used the same invisible force to inspire Moses at Exodus 3:15 to record His personal name that sets him apart from the many false gods men worship. He uses His Spirit to accomplish whatever His purpose is at that moment. In the creation account He used Jesus and Holy Spirit as He would use His hands to shape the Earth and all life upon it. In a similar way the Holy Spirit is power or force which comes from Jehovah God, not a separate life form as Jesus is.

To show the Jews alive in Jesus day that Jehovah’s favor was with Jesus and later with Christians, Jehovah used Holy Spirit to draw attention to Jesus. Jesus led a normal life, He did not have any special powers until He dedicated the rest of His Life to do God’s Will at His Baptism. Then He started to use God’s Holy Spirit to make God’s Values Known to the common people, which caused Jewish Religious Leaders to hate Him. God’s Holy Spirit was then used by Jesus and the apostles to accomplish many miracles. Jesus turned water into wine, He healed the sick, caused sight to return to the blind, fed 5000 miraculously, then 4000. Healed a lame man. Resurrected His friend Lazarus from the dead four days after death and told a wind storm to Hush. Peter used Holy Spirit to Walk on the water as Jesus did. The Holy Spirit empowered the Apostles to heal people expel demons and resurrect the dead and draw further attention to Jesus. After Jesus resurrection the Holy Spirit opened the Apostles minds to understand scriptures and remember what Jesus taught them and some of them were inspired to write books of the Bible. Jehovah’s Holy Spirit empowered about 120 members of the new congregation to speak miraculously in different tongues to Jews and proselytes who came to Jerusalem from distant lands. (Acts 2:4-11) Can you imagine, you speak only Hebrew from birth yet on that day when you met a Greek speaking man Jehovah’s Spirit enables you to speak Greek and explain to him all about Jesus Life and Death and Resurrection and how God now wants everyone to follow the Christian Way instead of the Jewish Religion. Then when you meet a Chinese man a little later the same thing happens by way of God’s Holy Spirit you can now speak Chinese and the man can understand what you are saying and witnessing to, what a Miraculous use of Jehovah God’s Holy Spirit. The Trinity doctrine states that God, Jesus and the Holy Spirit are equal, since the Holy Spirit is not an Individual Spirit Life this is a lie and unacceptable in the worship of God, Jesus stated that His Followers would be set apart by the Truth   See John 17:17

Angels, Satan and Demons have a similar spirit. We can see that Angels, of those doing Gods will, are much more powerful than Satan and the demons that have rebelled against Jehovah’s Sovereignty. In the days of King Hezekiah of the Nation of Israel one Angel doing God’s Will killed over 185 thousand Assyrian troops that were laying siege against Jerusalem in one night. The point being that  Jehovah loans His Spirit to or uses His Spirit through those doing His Will. See Judges 14:6, 2 Chronicles 32:20, Matthew 3:16,17

God’s Holy Spirit is a Powerful Force that He and Jesus use to accomplish His will.

Satan and those angels who have stopped being loyal to Jehovah, demons, use their powers to influence people to do things that will separate them from God’s Love. The greatest way they do this is in creating false religious teachings. Why do they do this? Because Satan was envious of the worship Adam and Eve gave Jehovah God, he wanted  people to worship him. Satan was not able to elevate himself to Jehovah’s stature as God, so now he is doing all he can to divert any worship away from Jehovah. Using false religious teachings, he satisfies the desire people have to fill the spiritual need that men and women have as brought out at Matthew 5:3 . People going to temples, synagogues and churches are like a man with a pocket full of counterfeit money, he not knowing it is counterfeit, he hides it away in his home. He thinks he is rich, he is satisfied with it, it gives him a sense of security and comforts him. That describes many people today who have learned false religious teachings. Many of them do not want to examine their beliefs or to hear that they are not satisfying God’s requirements for a good relationship with Him, they are satisfied with a sense of security with God. They have been led to believe that if they show up at a place of worship, ask forgiveness for their sin’s and try to be good, that God Loves and Forgives and Accepts them regardless of what they believe or do.  Read Matthew 7:13-14, 1 Corinthians 6:9,10.  Satan claims all these as choosing his way of life, over God’s way, is he claiming you?

Demons must be what are seen or heard when people testify they have seen a ghost, since the Bible clearly states that humans do not have a living spirit life that survives their death. See Ecclesiastes 9:5-10  Demons are recorded in the Bible as wanting to cause fear and pain and suffering in humans. The Bible also states that demons may cause lameness, blindness, stumbling or madness or be used in predicting the future because they can cause things to happen that men or women cannot detect. To promote a Church or Church leader they can also be conjured to heal the sick or perform powerful works. Read Matthew 7:22-23. Many will say to me in that day: ‘Lord, Lord, did we not prophesy in your name, and expel demons in your name, and perform many powerful works in your name?’23 And then I will declare to them: ‘I never knew you!  Get away from me, you workers of lawlessness. If Jesus did not know them, where did they get this power? from Satan and the other demons.

Demons are widely used by spirit mediums or vise versa. Spiritism is closely related to drug abuse or druggery or an altered state of mind makes it easier to be influenced by the demonic spirits in opposition to everything that good. Spirit Mediums, Fortune Tellers, Palm Readers, Black Magic, Omens, Curses, Witches and Magic, Ouija boards can be explained as being demonic powers too, because they can strongly influence and control what people think, hear or see and believe. To prove this point just try to explain the Truth to a Trinity believer, all logic and reason have no affect on them, they are blinded by Satan’s spirit which hides the truth. See 2 Corinthians 4:4  Jesus taught us to pray for protection from such things at Matthew 6:9  And do not bring us into temptation, but deliver us from the wicked one. Satan claims all these as choosing his way of life, over God’s way.

What is God’s Holy Spirit doing today? Jehovah uses His Holy Spirit to use this information age to highlight Bible Truths and expose false teachings like the Hell Fire doctrine and the Trinity doctrine and Once Saved Always Saved. By doing this He releases those who were bound by those false teachings and allows them to draw closer to Him through accurate knowledge. The Holy Spirit is now being used to fulfill the prophesy written at Matthew 24:14 and Matthew 28:19,20.The Holy Spirit empowers people who have been freed from falsehoods to courageously share what they learned with complete strangers. Imagine yourself going to each door on a street, knocking, not knowing what may happen when the homeowner opens the door, but each door its our desire to share the marvelous Hope of Eternal Life that Jehovah is offering everyone today. Jesus did this and taught His Apostles to do this. This is the work that Jesus commanded His followers do until the end of mans rulership over the world and the start of God’s Kingdom. As brought out at Matthew 24:14 this work is the last thing Jehovah uses His Holy Spirit to accomplish before He sends Jesus to jail Satan and his demons and destroy those choosing Satan’s way of life over God’s Way. It is so sad that so many choose their future because they imagine they are too busy. In Noah’s day, Noah warned people then that there was a flood coming, people felt he was joking or foolish and because they prejudged Noah they did not accept Noah’s invitation to get on the Ark before it started raining.

Imagine what it takes to warn almost every person on Earth and yet do so in a way that they still have to exercise faith to make their decision. Jehovah’s Witnesses attempt to call on every home and record whether they spoke with someone or not. In a further attempt to reach all they can they speak with people where ever they may be found work, play, shopping or parking lots or pumping gas. In this way Jehovah, Who is a God of Justice, can see where and when they tried reach each person on Earth whose Heart might be inclined toward Him. Many homes have had them come to their door dozens of times. They do this to warn Everyone that God has set a Day of Judgment. They try to inform everyone willing to listen the Hope that is Available for them and their family. They too, try to remove any blood guilt that they could have for not warning their family, friends and neighbors. Jehovah’s Holy Spirit, is being used by Jesus Christ and millions of Jehovah’s Witnesses to finish this never to be repeated work.

We bear witness to the Justice and Love Jehovah God has shown by offering each person contacted with the opportunity to come to know Jehovah God and Jesus Christ, His Son, through a greater knowledge of what the Holy Spirit Inspired Bible says. Jehovah is sending His Holy Spirit to accomplish what the Bible states the near future holds, people can ignore It, they can resist It, but they cannot stop It. Matthew 24:36-39.

Is God a Trinity?