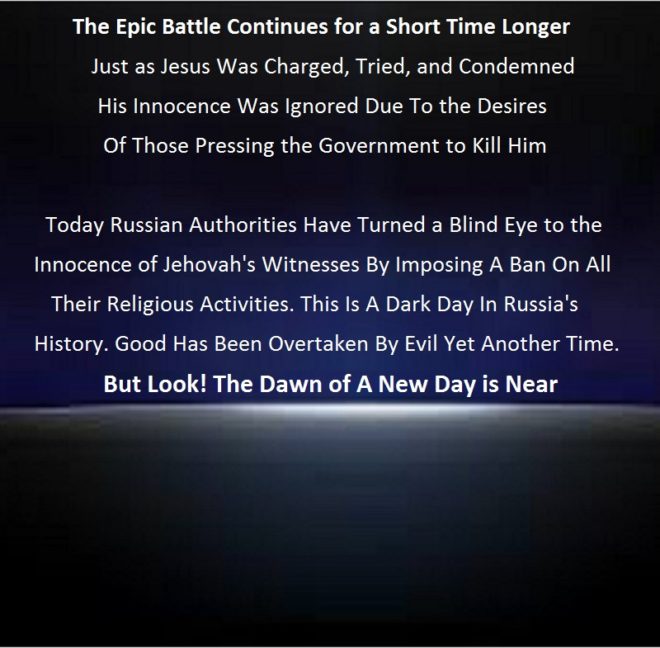 Reasoning out the Ban of Jehovah’s Witnesses in Russia

As Jehovah’s Witnesses are being banned in Russia; prejudged and found guilty in their highest court as being extremists. You might think they mean zealots, but no, they mean like terrorists. Many people have appealed to Russian Leaders by mail to reverse their course based on the activity of Jehovah’s Witnesses as witnessed by the population of the rest of the world. Many can testify to their civility based on the conduct of Jehovah’s Witnesses who have knocked at their doors in the past. Jesus taught his followers to hope in God’s Kingdom to bring about perfect living conditions on Earth. This is why they do not engage in protests or vote for political leaders. See Mtt.24:14. Jehovah’s Witnesses are often first responders in the frequent disasters around the world today, helping not only other witnesses but their neighbors and families as well.

Jehovah’s Witnesses do not interfere with governments now ruling around the globe. They have not flooded into the streets of Moscow in protest as extremists would. They do not criticize President Putin from the pulpit, pointing out his mistakes, so that the listeners may support someone else as President. So why would this great nation bother this civil, law-abiding group? The only reason that stands out, other than to appease the Orthodox Church, is that witnesses do not support or serve in the military of any nation. In this respect they may appear as dead weight, even aggressive as they teach others from the Bible why they should respect the gift of life. Reason it out, Would Jesus fight to the death with one of his disciples just because he lived in a different land? That certainly would not be in agreement with what Jesus taught when he spoke Matthew 22:37-39…you must be “loving your neighbor”.

Where Did All the Division Begin?

It all started some six thousand years ago, when a disgruntled angel left Heaven, which implies he left God’s approved arrangement and organization of angels. A struggle soon began between Good and Evil. That angel, who is labeled Devil or Satan, influenced the parents of the Human Family to rebel against Almighty God and His loyal angels that make up the forces of Good that are still in Heaven. Many other angels left the Heavens after watching men and women love each other. These angels created their own fleshly male bodies that they might enjoy something angels never could before, human sensual pleasures. Most of these were gathered up and imprisoned during the deluge in Noah’s day. See Jude 6

We know that in Jesus day other angels would possess individuals and cause them to throw themselves into the fire, or cause their host person to harm themselves in other ways, they were sadistic in desire, Jesus called those debased angels demons. Those demons did not die of old age, nor can they be destroyed by men, they live today and influence many evil acts in ways you might not expect, as we will see from the scriptures.

Who Defines Good or Evil?

Just as Jesus was, Jehovah’s Witnesses are hated by other religious teachers. Videos show church groups; led by an Orthodox Priest breaking up Witness literature carts and ripping the pages from their literature. The group followed the lead of their Priest, as they became a mob of hatred. It’s shocking to see how much these worshippers of god can be misled to hate this or any peaceful people. I’m sure the Orthodox religious leaders in Russia are influencing, even pressing the political leaders to ban Jehovah’s Witnesses. But why?

Why did Jewish religious leaders hate Jesus? Was it not because Jesus pointed out their hypocrisy? Did not Jesus point out that the scribes, Pharisee and Sadducees had made up or invented religious laws to load the common people down and elevate themselves? Jesus dressed as a common man, why do clergy today wear extravagant gowns and head coverings, velvet robes and gold jewelry? Jesus taught his disciples to go door to door searching out those who want to learn what the Bible says. Do church leaders search out everyone in their reach to teach them from the Bible or are they too elevated for such menial work that Jesus taught his followers to do? Jesus taught people for free, why is it religions around the world pay clergy’s to preach? Jesus teaching was always truthful, from the scriptures, why do clergy’s around the world teach doctrines that are not found in the Bible, like the Hell Fire Doctrine or the Trinity Doctrine or the Immortality of the Soul?

Jehovah’s Witnesses follow the pattern of living that those early Christians followed. The early Christians lived in “The Way” closely following Jesus pattern and obeying the one command Jesus gave them at his resurrection; to make disciples; meaning to teach others the truth from God’s Word, the Bible, even if it points out the hypocrisy of the Orthodox Church or any other religion. As those students progress they would be encouraged to follow Jesus pattern of dedicating their life to Jesus father Jehovah God, get baptized in water to show publicly that they are now one of Jehovah’s Witnesses just as Jesus was. The cycle would continue until the time set aside for it by God has elapsed. See Mtt.28:19,20 and 24:36

Why Will Jehovah’s Witnesses Continue to Preach?

Everyone that wants to worship Almighty God acceptably must obey Jesus command to teach others what they have learned. If you saw smoke coming from the roof of your neighbor’s house, would you just stand there and watch until flames came blazing out the windows and doors or would you immediately go pounding on his door, screaming the house is on fire? If you did nothing, you would be blood-guilty before God, as if you had murdered your neighbor. The same is true for everyone who has learned the truth of the Bible in the midst of those who have not learned yet. Even where it is illegal by man’s law, those who have learned of God’s Kingdom Hope are liable before God for approaching their neighbor with that message. When the apostles were commanded by civil authorities not to preach, their answer echoes in the minds and hearts of Witnesses everywhere. “We must obey God as ruler rather than men”. Acts 5:29

The Final Battles of Good and Evil Foretold

The Bible relates that on a near future day, a coalition political leaders around the world will bring an end to freedom of religion as they unite in their political goals. The nations will actually do God’s will when they turn to destroy the Great False Religious Organizations around the Earth (Babylon the Great). The clergy have prostituted their influence over the masses to the political authorities, preaching them into the trenches of war when necessary. See Revelation 17:16,17 18:1-8. See this is a religious organization by verse 23 “by your spiritistic practices all the nations were misled”. Misled by false doctrine and empty hopes of being “saved” from God’s Wrath. Notice too where the demons are in verse 2. Verses 11-17 speak of how the clergy enjoy the finest things of the world, at the expense of the common people who paid them to care for their spiritual needs, but received nothing but counterfeit bills in return (a false sense of well-being and salvation). The greatest fraud ever committed has been by those who have misled the inexperienced. Too Bad, too bad for all those who Hoped in Her and are found in Her company at that time. Just as the Serpent misled Eve, Satan and all his demons have misled the majority of the Earth’s population by using some 10,000 religious organizations around the world.

There are many people who suffer from willful ignorance. Jehovah God will not ignore them. In the final battle there will be only 2 groups that define Good and Evil. Those who recognize Jehovah as the One who defines Good and Evil and those who don’t. Just like in Noah’s day, why did everyone think that God would not harm them? See 2 Peter 2:5

After they decimate the religions of the Earth, political leaders of the world will now demand allegiance from everyone. Like a horse that follows the carrot in your hand, world leaders will be led into a worldwide situation. Revelation 16:14 states “They are, in fact, expressions inspired by demons and they perform signs, and they go out to the kings of the entire inhabited earth, to gather them together to the war of the great day of God the Almighty”. This will be the last move of the world leaders and all who support them. Millions of angels who represent the Sovereignty of Jehovah God will now strike them all like a great hailstone. See Daniel 2:43, 44. Due to the growing hatred and hostility and confusion many will kill one another. There will be no doubt at that time, Earths population will know for sure that Jehovah God has brought all this against those who do not subject themselves to rightful rule. See Ezekiel 38:23

All this was foretold in the first Bible prophesy at Genesis 3:15 “And I will put enmity between you (Satan) and the woman (Gods loyal angels) and between your offspring and her offspring. He (Jesus from loyal angels) will crush your head, and you will strike him in the heel.”

Jesus was born the Seed of Abraham. He along with the loyal angels of Heaven will Crush Satan, the demons and everyone who exercises hate against those who want to live in peace under God’s King and Kingdom.

After 6000 years the Earth has had many rulers,many great,many infamous. Libraries hold books written about them. Many borders have been drawn. Many men fought and died for Kings and Countries that no longer exist. So it will be for the rulers of Earth today. All man drawn borders will disappear. The libraries holding books of history will be destroyed and what is happening today will not be remembered. Jehovah God has promised His loyal witnesses Earthly life so good they will not want to be reminded of the days evil men acted hatefully towards those who meant them no harm. Jehovah God has installed His Son Jesus as King of God’s Kingdom. Jesus will never die. He will never be swayed by evil or public opinion.He will rule over the whole Earth without borders. He will lead everyone that has subjected themselves to Jehovah’s Sovereignty to an Eternal Life of Peace and Happiness as He Restores Edenic Paradise both Spiritually and physically Earth wide. Psalms 37:10,11