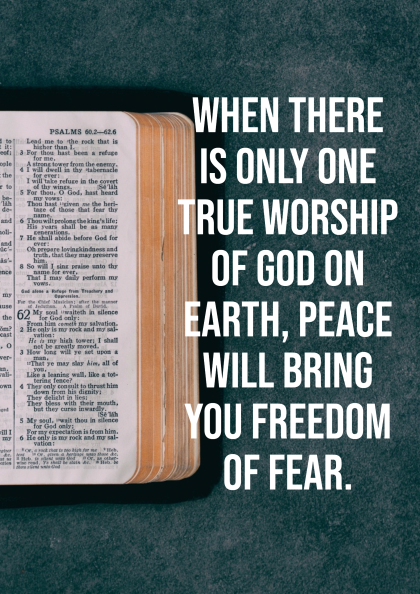 Men Will Stand Up for Peace

According to the infallible word of God, the Holy Bible, there are two forces that will stand up very soon to bring peace to the Earth. Men will soon find that religion is an agitating force among mankind. They see men make up foolish beliefs from the One Word that the One Truthful God inspired. The churches act like prostitutes of religion, giving what is defiled in God’s Eyes, for a price. The churches prostitute themselves in politics to appoint and preach support for national leaders and their policies. They are used to preach support for wars, even against the same religion across the border….? A coalition will stand up and remove these prostitutes of religion and men. Revelation 17:16,17 promises this. “And the ten horns that you saw and the wild beast, these will hate the prostitute and will make her devastated and naked, and they will eat up her flesh and completely burn her with fire.17 For God put it into their hearts to carry out his thought, yes, to carry out their one thought by giving their kingdom to the wild beast, until the words of God will have been accomplished”

Jesus Will Stand Up at God’s Command

On the night before his death Jesus prayed to God that He (God)would set His followers apart by one quality, see John 17:17 “Sanctify them by means of the truth; your word is truth.” The worship of Mary, and labeling her the mother of God is a ridiculous falsehood! Those believing this about God do not know Him, thus they pray in vain, for they do not know God, who is the only hearer of prayer. Why do their religious leaders continue to mislead people away from God? The Trinity Doctrine is one that is found erroneous, in many ways. So why do men still worship in harmony with this unexplainable doctrine? The ministers of the Christian churches have misled billions from knowing the real God,the True God, a quality of extreme importance when worshiping God. Why do they cover their ears and refuse to hear the truth and unite with God and men to bring peace?

John 4:23,24  Nevertheless, the hour is coming, and it is now, when the true worshippers will worship the Father with spirit and truth, for indeed, the Father is looking for ones like these to worship him. 24 God is a Spirit, and those worshipping him must worship with spirit and truth. If there are True worshipers of God, there must be false worshipers that God is ignoring because of the “Falsehoods about Him” they believe! Which is the Church of False Believers? No one wants to admit they have misled billions and have committed the unforgivable sin! They are blood guilty for so many lives they brought to death before God.

Matthew 7: “Be on the watch for the false prophets who come to you in sheep’s covering, but inside they are ravenous wolves.16 By their fruits you will recognize them. Never do people gather grapes from thorns or figs from thistles, do they?17 Likewise, every good tree produces fine fruit, but every rotten tree produces worthless fruit.18 A good tree cannot bear worthless fruit, nor can a rotten tree produce fine fruit.19 Every tree not producing fine fruit is cut down and thrown into the fire.20 Really, then, by their fruits you will recognize those men.21 “Not everyone saying to me, ‘Lord, Lord,’ will enter into the Kingdom of the heavens, but only the one doing the will of my Father who is in the heavens will.22 Many will say to me in that day: ‘Lord, Lord, did we not prophesy in your name, and expel demons in your name, and perform many powerful works in your name?’23 And then I will declare to them: ‘I never knew you! Get away from me, you workers of lawlessness!

These are obviously Christians since they call Jesus “Lord”!  They perform powerful works, by whose power are they performing if not from Jesus? There are people living today, living in the time of the End, some have spent their lives in church and yet Jesus will say this to them! Why? because their leaders have refused to listen to the truth Jesus and God have spoken, they refused to reason it out, to unite with those who are doing God’s Expressed Will during the Last Days of God’s Patience.

Matthew 24:14 And this good news of the Kingdom will be preached in all the inhabited earth for a witness to all the nations, and then the end will come. The will of God is to invite or warn every adult to the most distant part of the Earth. This has been accomplished, it is still continuing in many other means today until the day set by God to bring an end to this system of man’s rule.

So what is the message of the Bible: God explains His Almighty Power and Glory in the Heavens, He is ALMIGHTY meaning without equal! He has chosen a name to apply to His Person Forever, an eternity our minds cannot perceive. Exodus 3:15 brings out God’s name is YHWH in Hebrew with the consonants, in English the most used pronouncement is Jehovah! He has promised everyone opportunity to learn about eternity firsthand at John 17:3 This means everlasting life, their coming to know you, the only true God, and the one whom you sent, Jesus Christ.

According to the Bible Adam, the forefather of every person having a human father, rebelled against God in Eden some time after Eve was given to him. This made him a sinner, everyone born from him, was born into a prison of sin, sickness and death.

God took Jesus from His large family of angels, He transferred what was the essence of Jesus into the womb of Mary that the father of her child would be sinless, thus Jesus was born sinless and remained that way until he was unjustly put to death. God applied Jesus sinless life to replace our sinful forefather Adam, eye for eye, thus giving everyone from that time on a basis to ask for forgiveness and release from sin’s prison. A pardon has been given to everyone asking and continuing to worship God in spirit and truth, praying to Him Only, asking everything in Jesus’ name.

So when is the release date and the restoring of sinless flesh going to be? Only God knows when He will tell Jesus to”Go”, but we know the Day is near because of the fulfilling of the prophecies given that we might prepare our minds and hearts. Peace with all security will take place for everyone who has applied themselves to know the True God and the one He sent forth, Jesus Christ.

And who are doing their personal best to worship God Jehovah in the way He approves? The Bible answers at Isaiah 43:10-12 “You are my witnesses,” declares Jehovah,“Yes, my servant whom I have chosen, So that you may know and have faith in me And understand that I am the same One. Before me no God was formed, And after me there has been none. 11 I—I am Jehovah, and besides me there is no savior.” 12 “I am the One who declared and saved and made known When there was no foreign god among you. So you are my witnesses,” declares Jehovah, “and I am God.”

praisejah.org is an independent commentary of all things concerning the Bible