The Flood-Seriousness of the Warning

Is what happen in the Days of Noah important to people today?  Why did God use such extreme measures?

The Flood-Seriousness of the Warning. What Led Up to the Flood and the loss every life on the land?  As Adam was created by God we learn from the Bible that the Angels in Heaven were intently watching this. The scripture shows us that they burst out in applause on seeing all of creation. Job 38 verse 7  : When the morning stars joyfully cried out together, And all the sons of God began shouting in applause. The angelic Sons of God were amazed at this, here they had a fleshly relative. There had never been anything like this take place before anywhere. Adam was the first fleshly person ever created to have the attributes of Jehovah God. How would the angels interact with him.

It did not take long before one of these angels cultivated a bad thought. After Eve was created, he wanted Adam and Eve to look up to him instead of Jehovah God. He coveted the reverence that they would give to Jehovah God. Have you ever wanted everyone to look up to you? Would there be any thrill  for you if the whole planet was paying attention to you? What if they were looking to you as God or His spokesman?

Jehovah God had planted many trees in the Garden of Eden that were good for food and Adam and Eve were allowed to eat from these at any time, however there was one special tree that Jehovah commanded them not to gaze on or to touch or they would perish as they had seen the animals do. As long as they respected that this one tree was Jehovah’s special property they would continue to live in harmony with Jehovah and His purpose to fill the earth with them and their children.

The angel who coveted the worship they gave to God, being referred to as the Devil later in the Bible, spoke to Eve while she was away from Adam. He implied that Jehovah was lying to her and Adam, that they would not die if they ate from that one tree, in fact they would become like God, able to choose right and wrong for themselves. They could do anything they wanted, with no one telling them what is right or wrong?

The Devil had just slandered Jehovah God, can you imagine what its like to know someone has lied about your character to someone else? What if that person knew thousands of other people and was telling them the same thing?  Being like God appealed to Eve so she ate from the tree that she knew belonged to Jehovah. Later, while with Adam she offered him the fruit, at that moment Adam had to decide whether to be loyal to Jehovah God or his new bride. His decision brought misery and death to every person conceived by man since then just as the Devil wanted.

The next day Jehovah called to Adam and Adam hid himself, he felt shame or guilt for what he did.  Jehovah could of destroyed him and Eve at that time. However, the Devils actions had opened a more important question. Did the Creator of angels and men and women have the moral right to decide what was right or wrong? Could men decide better than their creator? Would their decisions bring about better conditions on the Earth? And what of the Angels in the Heavens, could they better themselves by following the Devils lead?

Jehovah in His great wisdom let the Devil and all the angels that wanted to choose for themselves and Adam and Eve and their offspring live for a period of time to provide the evidence of what life would be like without His influence. We are all an article of evidence along with nearly 20 billion others showing what life is like alienated from God, in opposition to our creator and His Sovereignty. That way if there was ever anyone else who stood up and said there is a better way life, all anybody had to do would be look at this historic evidence much like human courts today. That is why the Bible states that Jehovah say’s “distress will not rise up a second time” at Nahum 1 verse 9. So that the evidence is not tainted Jehovah did not influence humans or speak with them personally, except for those who showed themselves to be of great faith and loyalty to Him. He did show his power in behalf of a man named Abram and his offspring. In most cases an angel represented Him. To explain all this to the future generations Jehovah inspired men to record these events so we could understand questions like:  Where is God?  Why are we here? Why do we grow old and die? What happens to us at death? Is this Life all there is? Will Life always be like this? What does the future hold?

After Eden some angels saw that the women on earth were beautiful. So they created their own male human bodies and went taking women as wives. The angels referred to as the “Sons of God” or “Sons of the True God” in Genesis chapter 6 verses 1-3 where it reads: Now when men started to grow in number on the surface of the ground and daughters were born to them, the sons of the true God began to notice that the daughters of men were beautiful. So they began taking as wives all whom they chose.

These were powerful beings, they were spirit living beings in a fleshly body, much more powerful and unstoppable for mere human beings. Since this was the case, they went taking all the women they wanted. If one of them wanted your wife, there would be no way you could stop him from taking her. Married or spoken for made no difference, they dominated over all puny human men.  If we were spirit and flesh as so many religions profess, we might of been able to take a stand against them, however as you know, descendants of Adam and Eve die easily, human life is fragile. If we are humans with a living spirit that separates and goes to Heaven at death like those angels did, why were these Sons of God so much more powerful and unstoppable? The truth must be We are not of that Sort. We are not Spirits.

Their offspring on the other hand were just fleshly like we are, they were all flesh with no separate angelic life, they could die just like we do. However, they grew bigger and stronger than men from Adams offspring, some reference them to be 10 feet tall or larger. They were bullies like their fathers they are referred to as Nephilim in Genesis 6 verse 4: The Nephʹi·lim were on the earth in those days and afterward. During that time the sons of the true God continued to have relations with the daughters of men, and these bore sons to them. They were the mighty ones of old times, the men of fame.

Imagine what it was like having a bunch of giants roaming the earth taking what ever they wanted. This caused the earth to be filled with violence. They had the ability to live forever because they did not come from Adams gene pool. They and their angelic fathers would live forever if not stopped by some miracle. What started as a display of great love by our Creator had turned into a test of loyalty for every life He created. The earth had turned into a play ground of the wicked that left the natural state of their creation and rebelled against all that is good. We see that same rebellion still going on today, as religious leaders teach against our natural creation of life as flesh on earth, they teach that we are really of heaven. 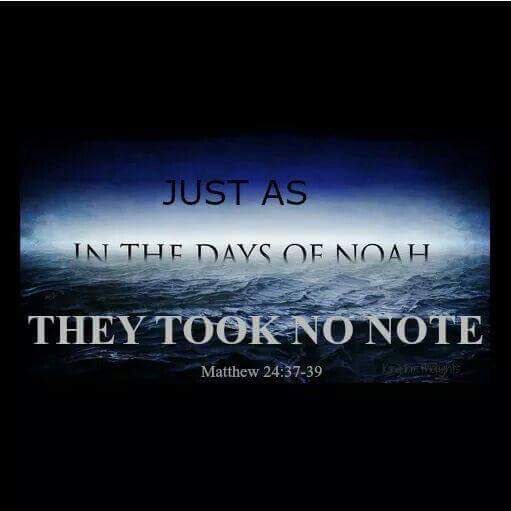 In order to separate these angels and their offspring from the earth and reduce the life span of men Jehovah caused a Great Flood to take place in 2370 B.C.E. The Flood would cause these angels to leave the bodies that they had created and return to the Heavens. There they could be retained for future judgment. Their offspring perished in the flood with every other man or woman or bird or mammal or reptile outside of Jehovah’s protection. Prior to the Flood Jehovah had commissioned a man named Noah to foretell that a Great Flood was coming that would destroy every living thing on the surface of the Earth. He warned them that the only way to survive this Flood was to join him and his family on this Great Ark that God had commanded Noah to build some 40 years earlier. They failed to give heed to that warning. Is Jehovah warning people today “just as the days of Noah?” See Matthew 24:36 People ignored what Noah warned them would occur, they may have mocked him, seeing him as a man that was joking.

Today, over 8 billion of people have pretty much done the same thing. They don’t have anymore time in their busy lifes for God. They have hired men with legal documents to show them the way. They feel if there is a better way they will see it on CNN or find it at Wal-mart. After the Flood of Noah’s Day, what could be said? Too bad, too bad. If you are different then most people, know that Jehovah God is still looking for you, He is still listening for those praying:              O’ Jehovah Please Show Me The Way, Please Help Me To Know You Better………………………..                          Hear the Drama Play Out

All is not lost, we have a Great Hope of Life on Earth Forever as brought out at Revelation 21 verses 3-5 after the Great Day that is Upon Us.

21:3 With that I heard a loud voice from the throne say: “Look! The tent of God is with mankind, and he will reside with them, and they will be his people. And God himself will be with them. 4 And he will wipe out every tear from their eyes, and death will be no more, neither will mourning nor outcry nor pain be anymore. The former things have passed away.”
5 And the One seated on the throne said: “Look! I am making all things new.” Also he says: “Write, for these words are faithful and true.