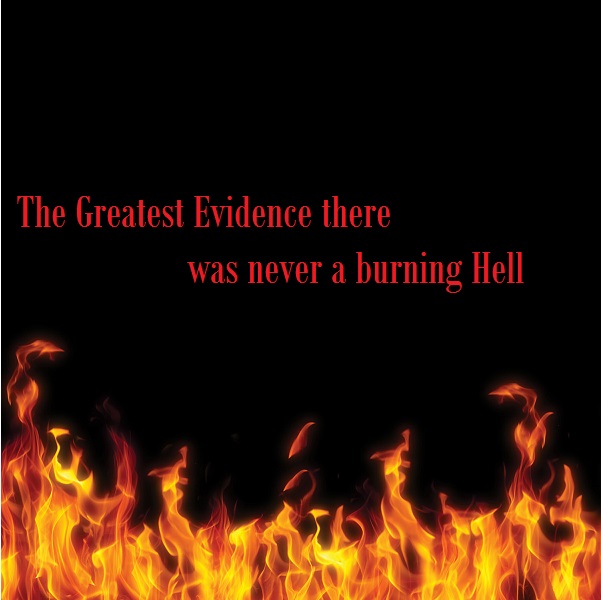 The Greatest Evidence there was Never A Burning Hell

1.  Background: Looking back to the account of Adam and Eve in the Garden of Eden we see that life was good. For many years prior to Eve’s creation Adam and Jehovah spoke . Adam was a perfect form of life his cells would replace themselves perfectly for all eternity. He was created not as a newborn that are born today with an empty tablet so to speak, but as a man with advanced thinking and communication abilities. Jehovah God brought the animals that He had created and allowed Adam to name them. See Genesis 2 verses 19,20 .The names that were given the different animals and birds show that they came from someone who had studied them, then named them. Do you feel that the names fit the animals? Verse 23 is shown to be a quote of what Adam said upon seeing his new companion, doesn’t he sound like someone who has knowledge of what has happened and is able to convey it in words.

2. Genesis Chapter 3 is the base of the whole Bible. This is where Satan misled Eve into eating of the tree set apart as Jehovah Gods and influenced Adam to eat of that stolen fruit too. This is why our lives are full of pain and suffering until death. The entire Bible was written to explain what has happened and why things are the way they are, and what will be done to bring all things full circle .

The Bible is more than a book of history, but a book that foretells the future, the Bible itself says it is inspired by God, meaning that God put the thought in the minds of the writers but allowed them to put it into their own words. As a basis for faith in the Bible are the many prophesies, events foretold before they occurred, that are recorded in it, that came true. The first and most important one of these is written after Adams disobedience at Genesis 3 verse 15 : And I will put enmity between you and the woman and between your offspring and her offspring. He will crush your head and you will strike him in the heel. What this says as brought out in the Bible, Jehovah God was speaking to Satan the Devil telling him there would be hatred and resentment between Satan and the body of angels loyal to Jehovah, the woman. This enmity would continue over many years between those angels/demons loyal to Satan and those angels loyal to Jehovah. Jesus the offspring of Gods loyal woman will destroy Satan and the demons and his offspring (those openly loyal to Satan or those who are disloyal to God, those straddling the fence would go to Satan’s side) by crushing the head. Satan would harm Jesus by causing His death, that death was reduced to a HEEL strike when Jehovah raised Jesus from the dead. We can see that this first prophesy written in the Bible has been partially fulfilled by the death of Jesus and His resurrection and we are awaiting Jesus capture of Satan and the demons on Earth at Judgment Day which will lead to their death.

3. Genesis 3 verse 16 speaks of Eve’s punishment for her disobedience, painful childbirth and a strong desire to be with her husband until her death would be passed on to every woman descendant born. Verse 17-19 speaks of Adams punishment. He would have to work for food, it would no longer grow without cultivation, he would have to work hard for food until he died. Can we see that this is still the case today?  Do we not have to work for food today? Do all the fruits and grains and vegetables that people eat just grow wild outside your door?

4. What does all this have to do with Hell?  Please consider the qualities written below and we’ll see who the  God of the Bible is and if he created a place of torment. The Bible states that Jehovah God has four outstanding qualities that balance each other. The qualities are Love, Justice, Wisdom, and Power.

5. Jehovah’s Love: The world has focused on the Love God showed in sending Jesus to the Earth as written in the Bible books after Jesus death. We see that Jehovah enjoyed creating the animals by watching their playfulness that He instilled in them. Just watching squirrels playing tag in the yard, rolling in the grass, we can see they were created to enjoy life. When a dog or cat wants to get comfortable in you lap, we know they did not evolve to be like that, but a loving Creator instilled that into them so they could be a loyal companion to men and women. Could that same loving Creator torture or abuse those animals?

6. Jehovah’s Power: It’s not just that Jehovah was powerful enough to create the universe, its that He was able to control the Big Bang. Most of the time a explosion sends debris in every direction, however in creating the universe the explosion and the spreading of matter was flat and spinning like a Big Pinwheel and the galaxies contained in that pinwheel are the same shape and everything is turning and expanding away from each other, that’s why everything is not colliding all around us. He easily controls the planets rotation, the wind, and the rain as attested to by Bible writers. He is abundant in energy in that He does not need to sleep like fleshly beings do. We look at our sun as a powerful force, but wouldn’t the Creator of all the suns and planets and moons be more powerful than we can measure or comprehend?

7. Jehovah’s Wisdom: Jehovah’s Wisdom is seen in that creation too. Think of the water system, how the water from the oceans rise into the atmosphere and condense and fall on the earth below today and for millions of years into the past. Think how the trees and plants cast off their seeds every year, the rains come and seeds grow and give us fruits and grains and vegetables and grasses for many animals every year. Think about how that process happens here now and six months later begins in the other hemisphere, year after year. Think of how the animals mate generally in spring and a new generation is born, year after year. When men build a home, it needs repairs very often, yet Jehovah has built us a beautiful home far more complex than any house built by men and has not needed any repairs for the millions of years in the past.

8. Jehovah’s Justice: Jehovah’s Justice is equal to His Love, Wisdom and Power. He sets the highest standard for justice, no human judge could ever compare to Jehovah. Men are partial, prejudice, bias because of many things that influence them like education, wealth, race, appearance and other mental faculties that exist in their minds. Jehovah is described as Holy, like pure white wool without spot. He is Righteous all His Judgments are what is Fair and Right, without the smallest spot of partiality, prejudice, or bias. His dealings with men over the years as written in the Bible teach us so much about Him and Justice and Morality.
This brings us to Adam and Eve. The law given to Adam at Genesis 2 verses   15-17 reads Jehovah God took the man and settled him in the garden of Eden to cultivate it and to take care of it. 16 Jehovah God also gave this command to the man: “From every tree of the garden you may eat to satisfaction. 17 But as for the tree of the knowledge of good and bad, you must not eat from it, for in the day you eat from it you will certainly die.” When Satan as the serpent approached Eve its evident that Adam had told Eve what Jehovah said about the tree and that she understood is evident by Eve’s answer to the serpent. Adam most likely had seen animals die and understood what death meant. Adam was created to live and would never die as long as he stayed away from that one tree Jehovah had set apart as His. Jehovah in no way suggested to Adam that some spirit part of him would continue on and that Jehovah was going to torment him for all eternity in a burning hell if he ate from that tree. If Jehovah intended to torture Adam for all eternity if he ate from the tree and did not tell Adam that, we could say there is a flaw in Jehovah’s Justice because He said nothing of tormenting him for all eternity in Hell. Would you think there is a moral flaw in Jehovah’s Justice if that was the case? Gods thinking is so much higher than ours, we could never rightly find that Jehovah God did something wrong. Since Jehovah did nothing wrong then scriptures like Romans 6 verse 7 must be true. It reads: For the one who has died has been acquitted from his sin. This means that death is punishment enough in Gods eyes then and today. Are you not thankful that we have such a loving and forgiving Heavenly Father in Jehovah our God?