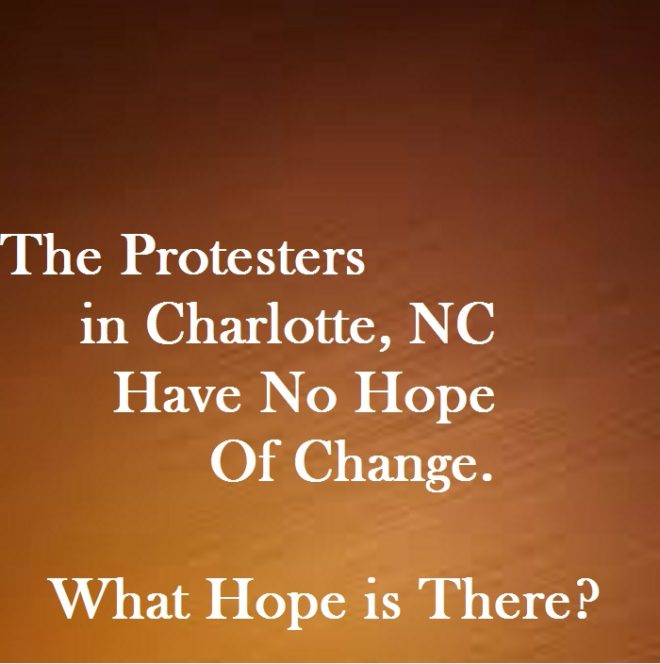 Posted on September 25, 2016January 20, 2019 by stevenjay Posted in In the NewsTagged NC, The Protesters in Charlotte, video

The Protesters in Charlotte, NC Have No Hope Of Change

The Protesters in Charlotte, NC see great injustice coming from Law Enforcement Agencies across the country. These things are not new. Injustice has been carried out by those given authority for 6000 years. Why did Cain murder Abel? Did he get away with it? The protesters see no reason to believe the future will be any different, that is where the real problem is. Police have gotten away with abuse many times in the past; all they had to do was lie about what happened. They were the authority and could criminalize the victim adding weight to their version of events. I’m sure that those joining law enforcement do so to make the neighborhood a better place. Most of the time it is only one or two in a whole department that give the whole agency a black eye. The fact that so many cameras come out at the first sign of trouble may help keep justice. Videos and pictures tell a story, but sometimes things are not what they appear to be. Was the dress blue or brown?

The Protesters: See No Reason to Believe Things Will Change

Why though did Cain murder Abel? Every person on Earth could do the same thing, because we inherit it from Cain’s father Adam. Sinfulness causes to act in selfish ways. We are partial; sometimes a person’s face or voice is all that is needed to be put on our bad side. Cain was jealous of Abel, have you ever felt that way of a brother or sister? Satan was jealous of Adam and the reverence he gave Jehovah God.

The past 6000 years prove that men cannot govern themselves. The selfish tendencies we all have win over us at one time or another. We cannot completely trust others because of this. If the Russians or Chinese were to say “We want to promote a more peaceful world, please disarm and disband your military and we will do the same.” Could we really do that? No, because of this no human government or organization will ever bring lasting peace and security.

The Protesters: Where Real Hope Comes From

The Bible, the only religious document that proves it is inspired of God, tells us that God foresaw that this world would be just as we see it.

2 Timothy 3:1-5 accurately foretold what the attitude of people would be today:   “But know this, that in the last days critical times hard to deal with will be here.  For men will be lovers of themselves, lovers of money, boastful, haughty, blasphemers, disobedient to parents, unthankful, disloyal, having no natural affection, not open to any agreement, slanderers, without self-control, fierce, without love of goodness, betrayers, headstrong, puffed up with pride, lovers of pleasures rather than lovers of God,   having an appearance of godliness but proving false to its power; and from these turn away. Is this not an accurate description? Even the Religions of the world are more business than unselfish Love, like Jesus displayed. Jehovah God foreseeing these things would exist has made arrangements to take over the Earth once again. He has allowed this time for all men to see that Men Cannot Rule Over Other Men Justly.

The Protesters: Look At What The Near Future Holds

Matthew 24:14 states: And this good news of the Kingdom will be preached in all the inhabited earth for a witness to all the nations, and then the end will come. Who have preached the Good News of God’s Kingdom? Jehovah’s Witnesses have covered the globe, systematically knocking of every door hoping to share the Only Hope for all Mankind. Angels flying in mid heaven have witnessed the response of individuals at all these doors. Have you heard of Jehovah’s Witnesses? Have they knocked at your door? Seeing the foretold work is days away from being complete, tells us what will happen next “then the end will come” 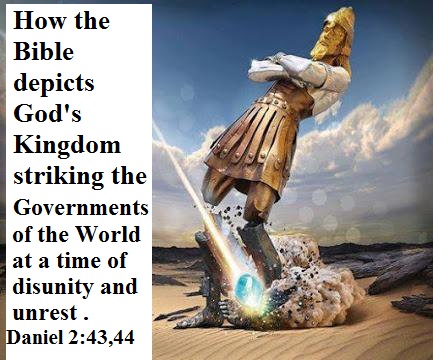 Daniel chapter 2 contains a time marker of when the Kingdom of God will take over the Earth. There, Jehovah gave King Nebuchadnezzar a dream that disturbed him. He summoned all his counselors to give the interpretation, they could not, however a prophet of Jehovah volunteered to give the interpretation. There Daniel tells the King that the statue he saw in his dream represented Human Governments. King Nebuchadnezzar of Babylonia was the Head of Gold, Medo-Persia was the shoulders and breasts, Greece was torso and hips, Rome was the Legs, Britain and the U.S. are the last of the World Powers. Daniel 2:43 and 44 foretell what’s happening now and what’s next.

43 Just as you saw iron mixed with soft clay, they will be mixed with the people; but they will not stick together, one to the other, just as iron does not mix with clay.

44  “In the days of those kings the God of heaven will set up a kingdom that will never be destroyed. And this kingdom will not be passed on to any other people. It will crush and put an end to all these kingdoms, and it alone will stand forever”

You can see how verse 43 spoke of the world power was “mixed with the people” what world power is mixed with people of the Earth? Could the phrase “but they will not stick together” describe the U.S. today? Verse 44 shows that God’s Government will Crush the U.S, Britain, Russia, China and every other human government. There is no stopping it, what is written in the Bible will take place soon. Jehovah’s word is carved in stone, unchangeable.

Jehovah states at Isaiah 55:11:  So my word that goes out of my mouth will be. It will not return to me without results, But it will certainly accomplish whatever is my delight, And it will have sure success in what I send it to do.

The Protesters: Look at What the Hope of Jehovah Is

The next 1000 years will be a time of increasing joy for Jehovah’s people.

First, Satan and his companion demons will be imprisoned and not allowed to influence the wicked tendencies to act out their wickedness. Next, Jesus and 144,000 men and women who have been resurrected to Heaven to serve as Kings and Priest will begin to rule the Earth. They will heal the blind, deaf, lame and sick. The people on Earth will begin to work at cleaning up the Earth, destroying every weapon, and remembrance of this way of life today. Jehovah will begin to bless the ground so that it will grow food naturally instead of weeds.

Jehovah will resurrect most of mankind that has died, except those destroyed by Him. No lasting harm has been done, starting with the first man murdered, Abel, along with men and women and children that have died over the past 6000 years will be resurrected from Jehovah God’s Perfect Memory and given a chance to learn of Jehovah, Jesus and the Ransom Sacrifice and live according to the Kingdom arrangement.

Jehovah is going to fulfill His Purpose to have Perfect Men and Women and Children enjoy Everlasting Life on a Paradisiac Earth. The Only Question Is “Who Will Survive and Enjoy These Things?” Will You?