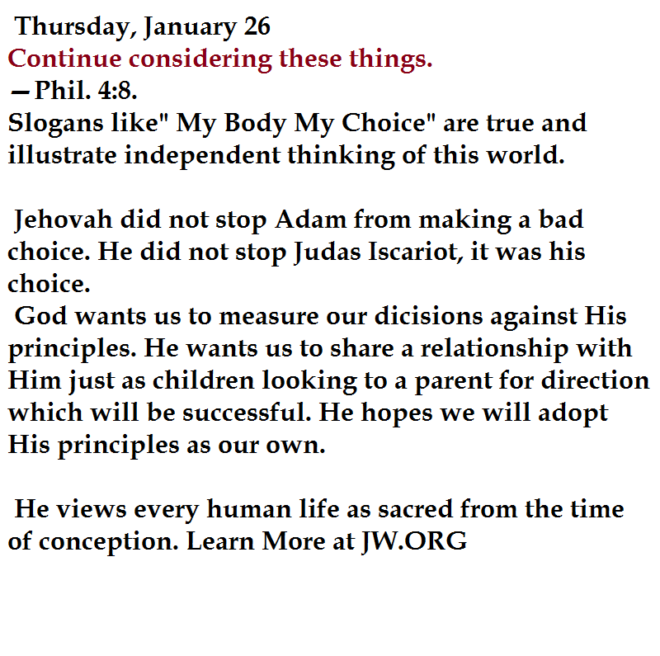 Posted on January 27, 2017January 20, 2019 by stevenjay Posted in In the NewsTagged March for Life, marching in protest, Women's March on Washington

People all over the World want change. Protestors stage large gatherings to show just how much they want it. The Women’s March on Washington and the 44th-annual March for Life in Washington, D.C  argue over an issue as old as humankind.

Choice: Who Will Decide ?

Slogans like” My Body My Choice” are true and illustrate the independent thinking of many people today.

Choice, God intended men and women to measure their decisions and there outcome against Jehovah’s principles. He wants us to share a relationship with Him just as children looking to a parent for direction which will be successful. He hopes we will adopt His principles as our own using them to make the best decisions in everyday life.

After Adam chose to disobey Jehovah the first time he lost his ability to seek Jehovah’s wisdom, for after Jehovah rendered judgment against Adam, Jehovah never spoke to him again. Adam began to change directly after his disobedience, the Bible states he was found hiding from God because Adam realized he was naked. Adam may have lived every day for many years nude in Eden, but suddenly realized it after his choice to rebel was acted out.

Why does marching in protest have no real value today? You can see for yourself how laws change back and forth with the thinking of the powerful or the majority at any given time. Our lifespan is short, we will soon be forgotten. What can we do to change the future of others living a hundred years from now? Too, laws are different in different lands and cultures. How can we change the world?

Choice: How Real Change Is Coming

Men seeing the futility and instability I just mentioned will soon move toward world domination and ruler-ship from a central body. Does it not make sense to you? I was not the first to think of it. The Bible described it first. Some forty four hundred years ago the people on Earth gathered together to build a tower into the heavens. Jehovah then confused the thinking of the language which ended the unity and the people scattered. The effects of that day are still causing disunity today.

After a coalition of countries begins to rule the Earth another government will become the next world power. Jesus told the apostles and disciples that they would rule with Jesus as Kings and Priest in God’s Government over the Earth.Matthew 19:28 states: Jesus said to them: “Truly I say to you, in the re-creation, when the Son of man sits down on his glorious throne, you who have followed me will sit on 12 thrones, judging the 12 tribes of Israel”

Later in Revelation 7 we learn the total number of Kings and Priest with Jesus will be 144,000 men and women who proved faithful to God’s Principles over many years until their death.

Unlike men, Jehovah has shown the same principles time and again in the Bible. He is called the Rock, in symbolism of His reflecting the same unchanging ways for eternity in both past and future. His Kingdom will govern from the Heavens in those same unchanging principles.

We know how Jehovah feels toward abortion. Exodus 21:22 states “If men should struggle with each other and they hurt a pregnant woman and she gives birth prematurely but no fatality results, the offender must pay the damages imposed on him by the husband of the woman; and he must pay it through the judges. 23 But if a fatality does occur, then you must give life for life, 24 eye for eye, tooth for tooth, hand for hand, foot for foot, 25 burn for burn, wound for wound, blow for blow.”

If life for life is true for an accidental miscarriage, how much more so any intentional aborting will violate God’s principle that life is sacred.

God’s Kingdom will rid the Earth of the many reasons a person may want to abort. Pre-marital or extra-marital sex will be a thing of the past. Birth defects also will end under the Kingdom Rule as Jesus and the other Kings and Priests bring us back to the human perfection Adam and Eve had before they rebelled. If you and your mate decide to have a child; that child’s future will not be something you will worry about. For the Bible exclaims at Isaiah 11:6-9:

6 The wolf will reside for a while with the lamb, And with the young goat the leopard will lie down, And the calf and the lion and the fattened animal will all be together; And a little boy will lead them.7 The cow and the bear will feed together,And their young will lie down together.The lion will eat straw like the bull.8 The nursing child will play over the lair of a cobra, And a weaned child will put his hand over the den of a poisonous snake.9 They will not cause any harm Or any ruin in all my holy mountain,Because the earth will certainly be filled with the knowledge of Jehovah. As the waters cover the sea.

The future holds Eternal Peace and Happiness for all those reaching out for the Kingdom of God by applying Jehovah’s principles today in their lives. We see from the Bible that are purpose today is not to change this world or it’s laws; but to help others to learn the truth about the Kingdom of God. How it is a real government that will remove human rulers and enforce the same rules for everyone. True equality for everyone living is just ahead. Men and women do not have children in the heavens. Human birth is an expression of Jehovah’s Great Love, Intelligence and Wisdom for us living on the Earth that will continue for eternity. Adam and Eve were created on the Earth to enjoy their children and the Earth Forever. Jehovah, The Rock, has not changed. You can Live Forever on Earth Forever the key is in learning all you can from the Bible and others who know “Why We Pray ’Let Your Kingdom Come’”

A Great Place to Learn is at JW.ORG