Skip to content
Posted on August 14, 2016January 20, 2019 by stevenjay Posted in Religious TruthsTagged faith in God, faith in Jehovah, God Almighty, Heavenly Father, Jehovah, Our Creator, our relationship with God, supporters of God

Do You Support God’s Plan to Restore Eden?

Our relationship with Jehovah is what defines us all.

Do You Support or Resist God’s Plan to Restore Eden? In this article Eden represents Jehovah’s Original Purpose to Fill the Earth with Adam’s Perfect Offspring. Could Adam’s disloyalty thwart His desire to do this? If a potter begins to create a beautiful vase, that falls off the table and breaks, will that keep the potter from continuing? No, in the same way Jehovah has not given up on His desire after millions or billions of years of preparations of the Universe and then the Earth where He will have men and women Live Forever enjoying a relationship with Him.

Adam was the first human to outright rebel against God. Jehovah finding that Satan led him up to it has decided to allow time that every life in Heaven can see that life on Earth without God’s Rulership is a miserable failure . This time has allowed other angels to show that they are resister of God too, while the majority have stayed loyal to Jehovah God, resisting any desire to enjoy fleshly pursuits on Earth. This is True Faithfulness and Loyalty, resisting your own desires to keep your relationship with someone else. Adam could have done this.

Jehovah’s Purpose has not Changed

Jehovah stated in Genesis 3:15 that He intended to rectify Adam’s deflection and continue His Purpose to fill the Earth with perfect human beings. Speaking to Satan, Jehovah say’s there will come to be enmity between Jehovah’s loyal angels and Satan and his seed.

Genesis 3:15  And I will put enmity between you and the woman and between your offspring and her offspring. He will crush your head, and you will strike him in the heel. (the Seed of the Woman became Jesus)  ( Jesus will Crush Satan’s head and all who resist attaching themselves to Jehovah God)

Jesus, born as a perfect human being on Earth. He makes known a lot about his Father, Jehovah. Jesus is put to the test by the Jewish Clergy. A man named Judas becomes a follower of Jesus and is counted as one of the 12 Apostles. Satan tempted Adam through is wife, Satan directly influenced Judas’s wrong desires to the point when Judas acted to betray Jesus. Jesus betrayer was there with him, acting as friend, as a Christian. Satan influenced those who put Jesus to Death, 3 days later Jehovah turned that death blow to a wound when He resurrected Jesus from the dead to a spirit life as he was in Heaven.

Step 2: All Resisters are Either Destroyed or Abyssed

The Bible states this at Genesis 3:15 as he (the seed Jesus) will crush your head ( Satan and all resisters). This time has been foretold in many scriptures. Daniel chapter 2 gives a time stamp by telling which countries would rule over Abraham’s seed ( Jesus became the Seed through Abraham’s offspring) until a Great Tribulation takes place. Daniel 12:1 say’s  “During that time Miʹcha·el will stand up, the great prince who is standing in behalf of your people. And there will occur a time of distress such as has not occurred since there came to be a nation until that time. And during that time your people will escape, everyone who is found written down in the book.” Others call it Judgment Day or the Great and Fear Inspiring Day of Jehovah or Armageddon. There is no neutral ground, just like there are two sides of a fence. You are either a supporter of God or Not.

God’s purpose is to take 144,000 faithful Christians to Heaven to serve as Kings and Priests in God’s Kingdom with Jesus Christ as Leader over the Earth. Those Anointed Christians exercise what we pray for at Matthew 6:10 “Let your Kingdom come. Let your will be done on Earth as it is in Heaven.” These Heavenly rulers will act as Priest helping us to recover a good relationship with Jehovah God as Adam had in Eden before he turned against Jehohvah in favor of Eve. He failed to resist his own desires and destroyed the Good Relationship with Jehovah.

After Armaggedon, New Information will be released by Jehovah God to the people living on Earth under Kingdom Rule of Jesus Christ and 144,000 Kings and Priests. This will be a very exciting time for those who support God’s Plan.

Step 5: Resurrection of the Dead to Earth

Starting with the first man murdered, Abel, those who have died in the grave will be resurrected to the Earth. There they will be educated about Jehovah, Jesus, Jesus Sacrifice, the Kingdom Arrangement and decide whether they want to subject to Jehovah’s sovereignty. This will be a very exciting time for those who support God’s Plan to meet all those like Abel, Enoch, Abraham and Sarah and even the prophets and Bible writers like Moses and Samuel and Daniel.

After everyone has been resurrected and given time to show what is in their heart. This is what is meant by the prophesy at John 5:28,29 “Do not be amazed at this, for the hour is coming in which all those in the memorial tombs will hear his voice 29 and come out, those who did good things to a resurrection of life, and those who practiced vile things to a resurrection of judgment.”

There will be increasing joy among those living on Earth at that time. People will be alotted their own land. They and their families will enjoy building their own homes. They will never get sick. They will never have a headache, backache or toothache. Isa.33:24 They will not need locks or weapons to protect their property because everyone will respect each other, for the Knowledge of Jehovah has filled the Earth and everyone living will want to stay in Jehovah’s Favor Forever. Adam would have never grown old and died had he just respected the relationship he had with Jehovah when Eve approached him with the fruit. Those who support God’s plan at that time may live on Forever, Everlasting Life under Paradisiac conditions, that is God’s plan.

After this a short period of testing will take. Almost everyone who is resurrected will have never been tested as regards their faith and loyalty to Jehovah. After this it will be almost 7000 years since Adam thrust all his offspring into alienation from God and brought Sin and Death to Billions of people. Jesus will now finish the prophesy at Genesis 3:15 by Crushing Satan and the angels that forsook their good standing with God.

Next Jesus will Hand the results of his rule over to Jehovah. All things will have been accomplished. Mankind will have been returned to Jehovah’s Favor. The Earth will have been cleansed of the wicked and all evidence that the Earth was near ruins from mankinds pollution. Jehovah states that “Distress will not rise up a second time.”Nahum 1:9.  What has taken place will serve as a legal precedent, if someone rebells they will be removed just as Psalms 37:11 states “10 Just a little while longer, and the wicked will be no more; You will look at where they were, And they will not be there.” 6000 years of history shows that men cannot govern themselves, no need to relook at that issue, ever.

Our relationship with Jehovah is the most important part of life

Mtt.5:3 states”Happy are those conscious of their spiritual need.” Our spiritual need is to look to our Creator and recognize the Love He has for Us. Every person on Earth will soon be associated with one group or the other by Jehovah God.
Jehovah does not view us as rich or poor, as intelligent or stupid, as successful or a failure. He does not see you as higher class or low class.

Jehovah views You Not as Flesh, but as a Relationship, as words and thoughts and desires and acts and whether you do or don’t consider Him in any or all of these.

He see’s someone who Loves Him because of the way He has shown great Love for us. Our bodies, Marriage, Childbirth and All Creation shows He put a lot of Love and Wisdom into it. He Created all this so that we could enjoy life and living on Earth. He Respects You because of the way you Respect Him, His Righteousness and His Life Enriching Guidelines. He speaks the Truth with you because you have shown that you Love Truth and Hate the Lie in a Lying World. How does Jehovah see you?

A Personal Relationship is possible with God. It starts very simply, in prayer address Him as “Our Heavenly Father Jehovah please help me to draw closer to you. Please help me to learn the truth found in Your written word the Bible. In the name of your son, Christ Jesus I pray.”

*This is just a sample pray,you don’t have to recite it word for word. 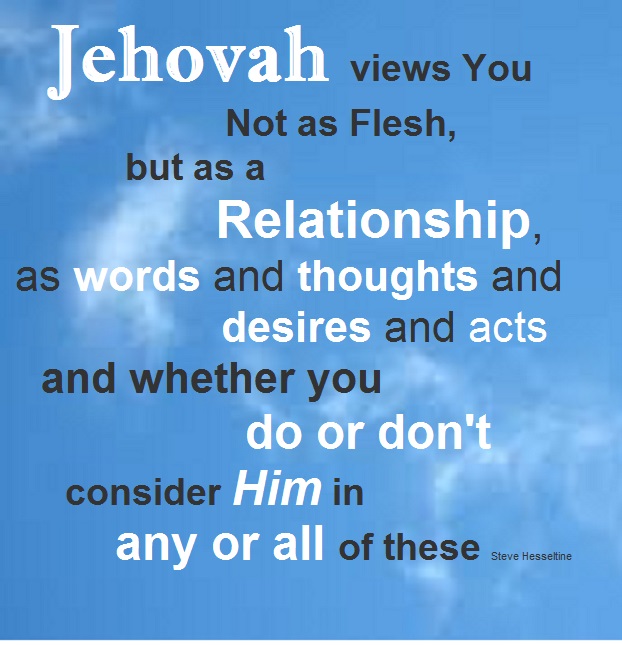