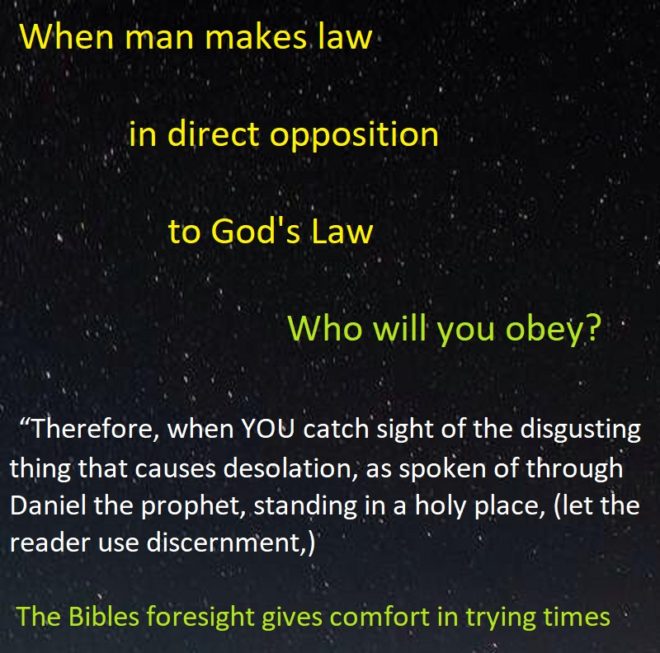 As you see on the news, there is distress in religion at this time. Unnatural sexual conduct is being revealed in one religion after another, bringing reproach on the God they serve if Christian. Yes it has happened, men and women, who had great faith and determination to follow Jesus example of moral integrity, did not turn away from bad thoughts fast enough. Even before Christ there have been improprieties, see 2 Sam.11:1-13. How is it different today? For the last 100 plus years, moral decay has progressed to where it is today. What was once not even spoken in public is now mainstream and demanding acceptance. The churches have watered down God’s moral standard to make themselves more inviting to the public, thus keeping donations coming in. Even at that, church attendance is waning. Historians will be quick to point out that religion has been an agitating force in the history of man, the catalyst in many wars. Churches have made alliances with heads of state to align the masses with their thinking. Today men use religion to enslave the inhabitants of entire countries, whereas others try to remove all worship or all but the one that they benefit from. As world leaders lose faith, they no doubt see that “Religion is a Snare and a Racket.” as brought out by Judge J.F. Rutherford in 1938.

We have seen the many facets of the sign of the Last Days given by Jesus Christ to his apostles, the fulfillment of the last prophesies pertaining to the conclusion of this world order have begun. The term world order is here used to describe the Earth fragmented into different governments and countries, led by men of different philosophies, a commerce system using varying values of currency to buy and sell goods and services and a religious system worshiping many different gods. All three divisions of this world order are under the influence of a spirit in opposition to God Himself, as seen in the Bible. Mtt. 4:1-11.

In Jesus description of events that will mark the Last Days, right after he stated “And this good news of the kingdom will be preached in all the inhabited earth for a witness to all the nations; and then the end will come” at Mtt.24:14, he then said “Therefore, when YOU catch sight of the disgusting thing that causes desolation, as spoken of through Daniel the prophet, standing in a holy place, (let the reader use discernment,)” at verse 15. Jehovah’s Witnesses have encircled the globe preaching the Good News of God’s Kingdom. Knowing the end is near; they are escalating their efforts to reach all they can with God’s message of Hope. As for verse 15, do we see any evidence that something or someone could try to take God’s place? Why are Jehovah’s Witnesses being persecuted and labelled as Extremists in Russia? Why are Russian brothers and sisters suffering torture at the hands of Russian officials along with forms of demented sexual abuse? Because of being singled out they encounter opposition at work and their children experience it at school and in their neighborhoods as their homes are searched for Bibles, while rifles are pointed at their children’s heads? How are Jehovah’s Witnesses different from the Orthodox Church that is allowed to worship?

Jehovah’s Witnesses choose to obey Jesus’ last command to his followers as he was being taken away at Mtt.28:19,20 “Go, therefore, and make disciples of people of all the nations, baptizing them in the name of the Father and of the Son and of the holy spirit, teaching them to observe all the things I have commanded you. And look! I am with you all the days until the conclusion of the system of things.” The apostles and disciples of the 1st century did the same work. The resurrected Jesus confronted an opposer of this way of worship, Saul of Tarsus, afterwards he too joined in the proselytizing work. Many books of the Bible would not have been written if it were not for the preaching and disciple making of those early Christians. They went from door to door and witnessed on the streets and where people gathered about Jesus and how God’s Kingdom will remove all human pain and suffering. Jesus foretold that this work would continue to take place during the Last Days of this World Order.

Too, Jehovah’s Witnesses hope in God’s Kingdom to restore Peace and Security to the entire Earth. How will God’s Kingdom do this? God’s Kingdom will remove every vestige of this world order. The Kingdom is an extension of God’s Universal Sovereignty where Jesus and 144,000 others will govern the Earth from Heaven with an eagle’s vision and foresight. They will remove all nationality and borders along with language barriers. They will remove all need of money and the enslavement it causes. Using God’s Holy Spirit they will restore the health of all Earth’s inhabitants and remove all sickness and diseases. They will educate those on Earth to live forever while worshiping the Only Almighty God in the way He has prescribed. The Kingdom will rule in Justice and true Equality, this will comfort every citizen.

Though the persecution is very painful for them and for us looking on, we know Jehovah feels the same way and has stated He will stand up for those calling upon His name. Joel 2:31,32, Acts 2:21, Roman 10:13. What is a comfort for them, all though they suffer today, like Jesus, the joy they have of pleasing God through their obedience to Him and knowing that whether they live or die, He will remember them and resurrect them to enjoy life again in that new world order. See Romans 8:38,39 .Too, they see that these acts of the King, though vile, are proof that God’s intervention is near.

Today there is great distress caused by the King of Russia. His government has written laws that contend with God. When a government writes a law ordering a people not to worship Jehovah God in the same manner as His son instructed people everywhere to follow, are they saying they are a god greater than the Almighty? What will he and other kings ask when God does nothing? If they are God’s people, why does God not save them? Mark.15:36. Their conclusion may be, God does not exist or does not care. Many people around the Earth have tired of the divisions religion brings. They do not want to hear that someone is judging their way of life. Many seek a separation of church and state on the pettiest of conflicts. This attitude of the populace will certainly embolden world leaders to expand their evil works and tear religion from the Earth. Many will run and hide or jockey for a position of favor in the coalition against God. When this question is asked of you, whom will you obey? We know a Great Crowd will answer this question resoundingly “It is Jehovah We Will Obey”. Listen to Jesus foretell religions end at Revelation 18

This will set the hook, the king and many like him will not be satisfied with the local lands of decoration; they will look toward the mountain of Decoration! They will line up in battle formation, taking their stand against Jehovah of Armies. See Ps. 2 and Rev.11:18. This has happened in in the past in a smaller scale, nations have come against the Israelite’s and against their God, Jehovah. See 2 Chronicles 20. Others have taken a stand against His direction as recorded in the Bible. Remember the account of King Hezekiah who was confronted by the Assyrian army, how God’s angel was sent to show His power in defense of His people, that angel killed 185,000 Assyrian soldiers in one night! On a more individual level, remember Joshua and Caleb who crossed the Jordan River with 10 others to spy out the land of which God was to give them. When they returned, the other 10 instilled fear and uncertainty into what may have been 3 million people. Joshua and Caleb tried to influence the people to just do what God has commanded. It may have appeared as the whole world was against them, like clouds that are covering the land, yet by their faith and obedience, they were prepared to do what God had commanded. God blessed them later for their integrity and will again as He resurrects them to the Earth under Jesus’ kingship. May we be comforted seeing that the world is moving God to the back and seeing themselves as the Supreme authority. May we be as courageous as Joshua and Caleb were, though we are seen as different, let us always obey God. Though the whole world has disowned the faith, May we always be comforted and strengthened when we are reminded: to Him We Do Belong . Isaiah 43:10 , See Acts 5:29